We have decided many things.  We will share one with you.  For the many of you who follow us, please, stop.  We do not like being followed and we are not going to lead you to anything and even if you did manage to find something out it would only end in a probing which only one of the parties involved would enjoy.  No, we are talking about our sharing information with you in a more formal way.  As many of you know, we have used multiple venues for our sharings with you.  We have, in the past, tried to use your own communication vehicles since it lends a certain amount of camouflage.  Now we are trying something new.  We are forging off on our own to see how it all works out.  We believe it fits quite nicely with the tribal arm of our study of your species.  But, we will see and only time will tell.  Actually, time will not tell you anything.  It’s just there.  Constant.  Moving forward at the same pace as always.  You can go quicker but time will not.  You can stop.  But time will not.  Time was here before everything else.  We probably should not have said that.  But, what the heck.  Consider it part of the experiment.

Your species seems stuck on always wanting something different, which you oft

en think of as better.  Instead of enjoying what you have, you need what you don’t.  This has led to the proliferation of your religions and drives much of your politics.  Even when you develop systems that are supposed to be for everyone you get it wrong.  So, it is no wonder that so much of your written history revolves around these alternative existences.  Such is the case here, where Unsworth (and we are sure this is a penname that has symbolic meaning related to the topic) has shared his knowledge of how Hell operates.  Unsworth tells us about Thomas Fool who is an information man in hell, an investigator with a never ending supply of cases and a demon boss who does not think all that highly of him.  But then someone is found murdered, which you would not think is all that uncommon an occurrence in hell, but evidently it is.  Fool investigates but gets nowhere.  Then more murders happen and Fool is under pressure to get things figured out and fast.  The problem is, while Fool is an information man, he is not a detective since there is no crime in Hell, or there was not until the murders.  Or there was but it was not really crime but expected behavior and so not crime.  We don’t know, we got confused on that part.  So, Fool has no idea, nor does anyone else, about what to do.  Essentially he’s learning as he goes.   Must we say that things get complicated?  It’s Hell, of course things get complicated.  And we have not even spoken yet about the angels.  We liked it although we are still not clear on which came first, Hell or politics.

Yes, it’s Deja Thoris all over again.  Once more we are being told about Thom 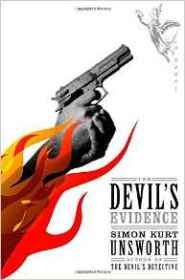 as Fool, investigator in Hell.  Only this time Fool is not in Hell but in Heaven.  Due to Fool’s rise in fame, he has new enemies in Hell.  And new crimes to solve.  This time it’s fires, which, again, you would not think of as a problem in Hell but there you go.  But, right in the middle of his investigation, Fool gets tasked with being part of a delegation sent to Heaven.  While there, he ends up investigating an impossible murder.  Needless to say, things get complicated, what with a Hell based detective asking questions in Heaven.  And, while Fool is running around Heaven, things are going to hell in, well, Hell.  But, what’s a fool to do?  More importantly, what’s this Fool to do?  Why, figure it all out, of course, and that’s were Unsworth shows his skill in letting things play out at their own pace and in their own time.  We liked this one as well as the first one, in case you could not tell.

We looked at many maps and could not find any New Arcadia, which is the location of this work.  We could not find any Old Arcadia or Used To be Arcadia either.  Must be a pseudonym.  Maybe for Chicago.  We hear that city is called many different thing

s.  Anycase, this takes place in New Arcadia and since the trappings are futuristic we figure it is allegorical.  So, back to New Arcadia and Hwa who lives there and is a natural human, meaning that she does not have any enhancements.  In fact she is the only one without any.  She’s also a hired bodyguard.  She also ends up as bodyguard to the youngest member of the most powerful family in New Arcadia.  She’s also connected to a series of murders that threatens the city.  This is a lot for one un-adapted woman.  Oh, yeah, the murders seem to have been done by a serial killer.  And an invisible one at that.  So, Hwa wanders through New Arcadia, bodyguarding the youngest member of a powerful family while a serial killer invisibly stalks nearby.  Just another day in paradise.  We liked it.  We liked Hwa.  We did not get the parable.  Maybe not Chicago after all.  We’d like to see more if we could.  That’s not up to us though.  Did we mention that Hwa has issues with her mother?

Imagine a huge ship, wafting its way through space. Imagine the ship filled with soldiers from a war, from both sides of the war.  Imagine the soldiers are in some kind of sleep.  Imagine something happens to the ship, taking it off course, 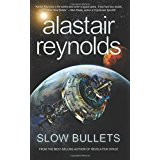 disabling it and slowly, very slowly, the soldiers begin to wake.  Imagine what would happen as the two sides come together.  Well, no need to imagine any of that because Reynolds has evidently beat you to it.  Not only that but he’s added in war criminals, a crew that is literally stuck in the middle, and a universe that wants nothing to do with the ship and those on it.  Interesting is the best word we could come up with.  We’re not sure where in the universe this takes place as we recognized none of the descriptions but that’s neither here nor there.  Literally.  Enjoy it.  We did.

This is part of the Hythrun Chronicles.  It is also War of the Gods Trilogy: Book One.  There are a number of volumes that make up these Chronicles.  To which we won

der: can you not complete your wars within a single volume?  Evidently not.  As a species you seem to enjoy dragging things along for years if not decades.  In fact we read a while ago about a hundred years war.  That’s a long time to be fighting.  If you ever manage to develop particle weapons you are going to be sorely disappointed since wars using those tend to last just weeks.  Princess Rakai and her slave half sister Charisee switch identities when Rakia is sent off to be the wife of a doddering old fool as part of a trade agreement.  Turns out Rakia is not really a princess after all since her mother had an affair with a guard captain.  And the whole thing would have gone south if not for the intervention of the Demon Child who calls the God Death to make a deal.  Complicated?  You bet.  But your entire species lives this way.  Well, except for the intervention of the gods thing because there are no gods but you did not hear that from us.  We enjoyed the intrigue even though this is yet another listing of places we have never heard of and which do not appear on any of your historical maps.  Time for your species to fix that.

We enjoy that you think the first response to most unknowns is marines.  In this case space marines.  But, still.  Also, black holes are not transportation hubs.  You can get energy out of them, yes, but if you try to travel through one you just increas

e the amount of energy available for the black hole and do nothing for yourself, unless your goal was annihilation by black hole.  In that case everyone wins.  Lord Commander Grayson St. Clair is, supposedly, sucked through a black hole and travels not only in space but in time as well.  And, sure, all travel involves distance and time but this guy and his ship traveled light years and 4 billion year units in time. We suppose if you are going to screw with the laws of the universe you might as well go big or go home.  In this case, neither is an option and so they do the next logical thing—call out the space marines.  In this case it does seem to be warranted since they seem to be facing a nefarious enemy that appears to be all powerful.  This is the beginning of a new series.  We do not know how many books are in it since, evidently, Douglas is making it up as he goes along.  Not the way history, even future history, should work.  Still, we liked it, even if we did not recognize any of the other species involved.  But, like we have said before, you are way out on the end of one of the spiral arms—a place no one goes—so, who is to say what’s out here besides you?  Get your own copy and enjoy.

This entry was posted on Monday, February 27th, 2017 at 9:40 pm and is filed under aliens, comedy, Damn Aliens, fantasy, horror, review, sawicki, Sci Fi Commentary, SF. You can follow any responses to this entry through the RSS 2.0 feed. You can leave a response, or trackback from your own site.