We were returning from the Oort cloud and as we drifted past the orbit of Mars, Klaarg called us to come look at the car in our way.  Now, Klaarg sometimes spends way too much time at the back end of the ram scoop so we are used to his seeing the odd thing here or there.  But, true enough, when we got to the viewing area, there was a car, with a spaceman driving.  While it is true that in space no one can hear you spin the wheels (this is because of the lack of friction), it is also true that space will have a bigger negative impact on your wheels than road salt.  Just like no one wants to buy a sports car that has been driven in a snowy climate, no one will want to buy a car that was driven in space.  Ah well, at least there is plenty of parking up here.  We ended up giving the thing a wide berth because who knows how this spaceman got his car into space in the first place and we just had the ship detailed.

We liked this one.  It’s about native peoples.  You know, the ones you try to kill off first thing when you get to a new place.  When we say you, we mean you, not the global you, but the Earthling you.  Any case, these native peoples have discovered an artifact th 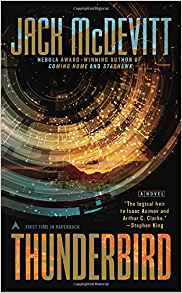 at allows travel between places.  They are unclear where, exactly, these places are, other than that one is in space, one is on a different planet and one seems to be just outside a city and there are a lot more.  All of them are, evidently, inhabited.  This creates a number of problems, not the least of which is a demand for the artifact to be used to cull resources from these places (apparently regardless of the beings who may already be there), but that’s just you all over again.  There are, of course, any number of issues that could come up in a situation like this and many of them are brought to the fore, both the positive and the negative.  And, sometimes it is hard to tell the difference for what is positive now may be negative tomorrow.  The resolution is a somewhat unique one.  Like we said at the beginning, we liked this.  You will no doubt like it as well.

This is the third entry in the Vicious Circuit series.  We think it is the weakest of the three which we find a bit disturbing.  It is almost like Brockway ran out of good stuff and just

needed to stumble to the end.  Then we remembered that he also wrote for Cracked which is not really known for its lengthy pieces.  We actually were a bit of a ways in before we even realized what series this one was connected to.  This is too bad because we enjoyed the first two.  We did.  You can go look.  Go ahead.  We’ll wait. We’ve got things to do anyway.  Okay now that you are back, and what, did you stop for pizza or something?  We do that some times and it always causes friction because Klaarg likes strange things on his pie.  In any case, the characters are all together again unless you consider their destructive self behavior to be not so much together.  One is a drunk, another is probably crazy, a third is an Empty One, and the rest are hanging on by their fingernails.  The other thing missing from this volume is humor.  It’s supposed to be funny but it’s really not so much.  We got through to the end.  You might be able to as well.

ed about this one a few cycles ago but for those of you too cheap to buy a longer lasting version, it is now out in a more self destructible form.  We liked this one a lot.  Klaarg hated it.  But then it has giant robots and if there is one kind of robots that Klaarg hates most, it is giant ones.  Sure he really hates Roombas but for entirely different reasons.  If you have not gone out and found this yet now is the best of times.

With illustrations by Giordano Poloni, text by Aidan Onn and design by Elsa Benoldi, this

card game is simple to play and can provide some amusement (and maybe a little argument) for those who consider themselves movie buffs.  Each card has a film on it with six items: Budget, Tech Spec, Cult Status, Future Foresight, etc.  Each item has a score.  The starting player selects an item, once cards are dealt out, and the player with the highest score for that item wins all the cards played that round.  That player then repeats and the game goes on until a single player has all the cards.  Or until Klaarg catches sight of the Forbidden Planet card with an illustration of Robby and destroys the deck.  It was fun until then.  Check it out if you will but don’t invite Klaarg over for a game.

This is one of your alternate histories.  In it, a celebrity simpleton manages

to be elected president of one of your countries and hilarity ensues.  Kind of, sort of.  Frankly we found it very far fetched.  But, if you can imagine elephants building spaceships who are we to talk about fetched.  This is full of just eye opening wonder and we had moments when even our credulity refused to go along but we continued on anyway, right until the end. Which, we should note, does not happen here as this is not a complete story.  Surely there will be a sequel or perhaps two.  We would suggest Insane Clown Posse for the title of the next one but we understand that is already taken.  And by the way, why did they put a Klingon on the cover?

Here we are and you have, yet again, squandered your time.  Think, you could have been cooking something wonderful or baking bread.  Instead here you are.  Ah well, everything cycles and you will too.  Eventually.  Keep the door unlocked for us.  Let’s face it, if you are selected for a probing the last thing you want to do is return home to a broken door.