It is good to finally be done with your Holy Days, although as we look at the calendar it does not seem that a week goes by without something that you celebrate by ceasing all work and progress, except for the negative stuff, that you manage to keep doing every second of every day.  We were out in the Oort again, just for the heck of it.  Lot’s of interesting stuff in the Oort.  You can tell a lot by the debris that surrounds a solar system you know.  Best of all the Oort is full of ammunition in case a planetary correction needs to be made.  We found any number of likely planet killer candidates.  But that’s a whole different discussion and most likely not needed since you are quickly turning your planet into an uninhabitable mess anyway.  Well, uninhabitable for you.  We’re sure many things will manage to survive.  And who knows, perhaps for the better in the long run.  Maybe some virus or sea slug will turn into a species that is not as self-destructive as you are.  It could happen.

This story just gets bigger and bigger.  It is like the expanding universe.  This big yesterday but this big today.  We still like this a lot.  It’s like letters from home.  Not that anyone sends letters anymore.  But that’s a whole different thing.  This time the crew of

the Roci are sent through one of the newly opened gates to mediate a conflict between authorized settlers and independent settlers for the same planet. As if this were not enough there’s a rebel underground and the tiny bit of goo from the protomolecule that is on the Roci manages to communicate with million-year-old remnants on the planet.  Oh James Holden what have you gotten yourself into this time.  We liked it.  A lot.  A real lot.  We think this is the best stuff out there right now.  Klaarg agrees and has been trying to figure out how he can sign up for a tour.  Not to be missed or ignored.  Read them all.  Do it today.  Who knows, tomorrow they might make a tv show out of it.

This is a graphic novel, which is just another way of saying it’s a big comic book.  This is about a guy who gets involved in an experiment that ends up having a world changing

impact.  Basically, it assigns a shielded AI bot to a prisoner and the bot enshrouds the prisoner so that no one can see them (or be felt by them so far as we can tell).  This seems great and soon prisons are shut down and all prisoners have bots and all bots are run out of a single facility.  The problem is that prisoners tend to not last long under the bot.  None of this really matters except that it is the driving factor in a story that otherwise is pretty boring and mundane. Unless we missed something.  But between the text and the pictures you would think it would all be pretty clear.  We finished it, but, then, it was a big comic book so how hard could that really have been?  Can’t say we liked it.  Can’t say we understood it.  We did like the pretty pictures.  But the story needed to be assigned a prison bot.  We won’t comment that the title might be the most fitting place for this to end up.  Oh wait, we just did.  Bad us.

It’s quite possible that this book is the most fitting we have ever come across for your species.  The second title is, 45 Visions of What Lies Ahead.  What the title does not tell you, although you could certainly put it together for yourself, is that nothing good lies 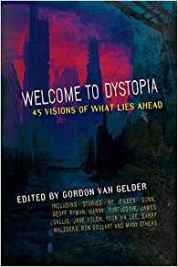 ahead.  Nothing.  Nada.  Nuttin’.  The nice thing about this collection is that all of the stories are very short.  This means that if there is a dystopian future that you find personally insulting, it’s only a few pages until the next, and perhaps one which might warm your heart.  Contributors include a wide swath of names that should be familiar to all of you.  Kevin Anderson, Lisa Mason, Barry Malzberg, Madeleine Robins, Paul Witcover, Eileen Gunn, Ray Vukecevich, James Sallis, and the list goes on and on and on like the roll call of some vast suicide club penning their final dark thoughts before drawing the blade across the flesh.  We liked it as it met all of our expectations and thoughts about how things might end for you although we have to admit there were more than a few scenarios that even we had not anticipated.  Well done, albeit we are not sure you should try consuming it in one sitting.

This is the third offering in this grouping.  We enjoyed the first two very much and we enjoyed this one equally so.  It continues the story of the ship intelligence that ended up

in a human, kind of, and has been waging a vendetta against the pieces of the current ruler of the aggregate known as the Radch. Yes, pieces, as the person is literally at war with herself.  Needless to say this makes figuring out who’s side you are on very complex.  The former ship, now Breq, is on a station that has been cut off from known space due to the war.  The station is surrounded by potential enemies. To make matters worse the station is visited by an alien emissary of a powerful, if somewhat erratic race, the last emissary of which Breq killed.  And to make matters even more worse, a part of the fragmented ruler shows up.  Talk about trying to figure out which side of the bread is the butter on!  Into the mix are the AI’s who have been set free, the people who are pretending to be pieces of various AIs and beings who are extremely old trying to outmaneuver each other.  As we stated before all this, we enjoyed the machinations, as it were.  So will you no doubt, but only if you peruse it yourself.  Go.  Buy.  We’ll wait.

Here you are once again.  What can we say but wake up!  And remember, love is like oxygen, you get too much you get too high, not enough and you are going to die.  While you are pondering this let us remind you that an authority no less vast than the Washington Post had this to say after reading this: “Pinocchios!!!!”  We did some research into this and wooden you know it, he’s not even a real boy.  We’re back to the Oort for ice cream.  We’ll probably return.  Look to the skies.